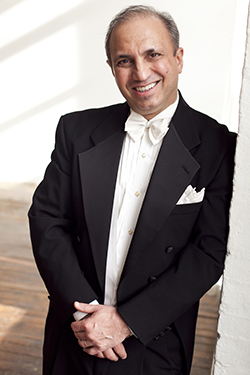 "...a degree of polish and refinement that is extraordinary...even to a critical ear that has heard the great orchestras of the world."

Markand Thakar is Music Director of the Baltimore Chamber Orchestra.

A former assistant conductor of the New York Philharmonic, Maestro Thakar's appearances include concerts and a national radio broadcast with that orchestra; as well as concerts with the National, San Antonio, Columbus, Fort Worth, Alabama, Edmonton, Winnipeg, Amarillo, Charlotte, Wichita, Chattanooga, Knoxville, Richmond, Colorado Springs, Greensboro, Illinois, Kalamazoo, Windsor, Flint, Maryland, Ann Arbor, National Gallery, Waterbury, Annapolis, and Florida West Coast symphony orchestras; the Calgary, Louisiana, Long Island, and Ulsan (South Korea) philharmonics; and the Boston Pro Arte, National and Cleveland chamber orchestras; and opera productions with the Baltimore Opera Theater, the Teatro Lirico d’Europa, Opera on the James, and the Duluth Festival Opera. A frequent guest conductor at the Aspen Music Festival, Mr. Thakar has appeared with Yo-Yo Ma and the Colorado Symphony Orchestra and with Itzhak Perlman and the Boulder Philharmonic, and is a winner of the Geraldine C. and Emory M. Ford Foundation Award. Familiar to national radio audiences as a frequent commentator for National Public Radio's Performance Today, he has appeared on CBS This Morning and CNN conducting the Colorado Symphony.

With BCO Thakar has recorded three CDs for the Naxos label, including disks of concertos by Classical Era masters Stamitz, Hoffmeister and Pleyel, and music by Jonathan Leshnoff on the American Classics imprint, named to Naxos’ “Best of the Best” list. BCO traveled to China to perform a series of Viennese New Year's concerts, and recent a performance in New York earned a warm review from the New York Times, which praised the group’s “warmth and substance.” During his 12-year tenure in Duluth, the DSSO saw dramatic growth in both audience and artistic prominence, to what Minnesota Public Radio called “Minnesota’s other great orchestra.”

Most significant was his work conducting the Munich Philharmonic under the mentorship of Sergiu Celibidache, the legendary former music director of the Berlin Philharmonic. “From Celibidache I came to understand that the 'magic moments' that we all experience from time to time can extend - even possibly from the very first sound of a movement through the very last. In such an extended 'magic moment' we experience a remarkable transcendence: we accept the sound, we absorb the sound, we become the sound, and in so doing we transcend everyday consciousness of time and space; we touch our conscious soul in a most remarkable way. My driving interest has been an exploration of the conditions - from the composer, from us performers, and from the listener - that allow this most profoundly exquisite, life-affirming experience.”

Thakar is the author of three seminal books. On the Principles and Practice of Conducting (University of Rochester Press, 2016) is a manual for acquiring necessary and invaluable skills and understandings. Looking for the “Harp” Quartet; An Investigation into Musical Beauty (University of Rochester Press, 2011) is a journey through the experience of musical beauty from the standpoint of the composer, performer and listener. The book is described as “a 225-page tour de force,” and “an exercise in academic excellence and a seminal contribution for personal, professional, and academic classical music studies” (Midwest Book Review). Counterpoint: Fundamentals of Music Making (published in English by Yale University Press, 1990) also issued in Italian and Czech) uses species counterpoint to promote an understanding of how both composer and performer contribute to the experience of musical beauty.

Thakar lives in Baltimore with his wife, violist Victoria Chiang, and their son Oliver.